.
Hawksnest--and all Cape Cod--was born during the last ice age.  Retreating glaciers left great chunks of ice half buried in the sand.  When these finally melted, they left rounded depressions that became rare coastal plain ponds. 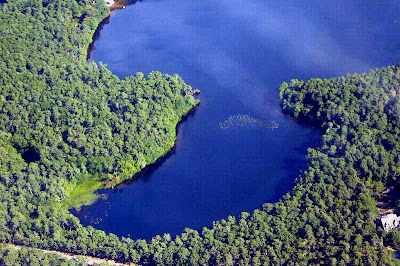 Meltwater streaming through the sand washed it of nutrients.  Elements like potassium were blown or washed out to sea, leaving a cape of sterile sand.  On such a windy place surrounded by water, it was difficult for soil to develop, because it kept blowing out to sea.

But fish and whales were abundant in the waters around the Cape, so the first settlements were built on the coast.   Eventually, the pressures of growing population, plus declining fisheries, prompted people to move inland to till the skimpy soil.  There was a turkey farm near Black Pond, and farmer Nickerson tilled the land on the SW corner of the 39-137 intersection.  There was a farmstead at the south end of Walker Pond.  In addition, many townspeople had woodlots around Hawksnest.

But many of these interior farmsteads and settlements were abandoned in the 1800s, probably because the soil was too poor.  It was easy to plow, but infertile, and didn't hold water.  In some parts of the Cape where land was abused, the soil and vegetation were destroyed, and dunes began to move again with the wind.

People moved away, and their descendants forgot about the "worthless" land.  The remaining folks used the abandoned lands as a "commons" for hunting and cutting firewood.  Somewhat later, small cranberry bogs were established on all the ponds and wetlands of the area.

It's the sterility of the soil which makes Hawksnest what it is today.  It creates a unique--and rare--community of plants and animals.  The sandy Cape acts like a filter to keep the water pure. 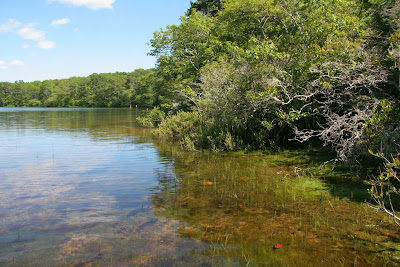 Not a drop gets into the pond unless it flows through the clean sand, or trickles through the ring of intact vegetation all around the pond.
Because the sand is so pure and sterile, the water is clean--and free from nutrients which could stimulate the growth of plants in the water.  Rooted aquatic plants tangle your arms and legs as you swim.  But the worst kind of growth is blue-green algae.  When stimulated by an increase in nutrients (such as nitrogen or phosphorus), these microscopic plants can suddenly shift into high gear, making the water stinky, and sometimes quite toxic.  Once this happens, it's nearly impossible to restore balance in the pond.

Hawksnest Pond has the best water quality* of any pond in Harwich.  It owes that quality to the lack of nutrients.  The pond is relatively safe from nutrients leaching out of residential septic systems, because it's situated near the watershed "divide" of Cape Cod.   In other words, it's like a pristine mountain lake, perched on the continental divide.

But the pond is in extreme danger from nutrients imported to the park by other means.  While any one source of nutrients may be small, together they can and will add up to destroy the water quality at Hawksnest, if we aren't vigilant. 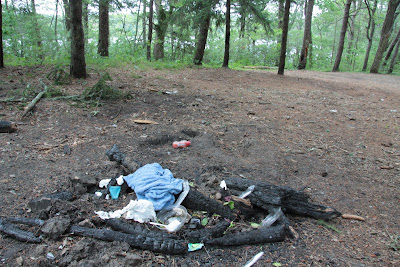 These sources are rich in nutrients and must be controlled:
Some people say, what's so bad about dog poop?  The deer do it in the woods... what's the difference?

The nutrients in deer droppings come from nitrogen or phosphorus already in the soil at Hawksnest.  In contrast, the nutrients that dogs, people, or horses eat are imported from thousands of miles away.

Traces of the past remain

There are numerous old roads and depressions from abandoned homestead scattered around Hawksnest.   The Seth Whitfield and Nathan Walker roads remain as reminders of wagon paths that served these bygone farms and settlements.

In late 1800s and early 1900s, duck hunting at ponds on Cape Cod became popular.  Hawksnest Camp, still present on Hawksnest Pond, was established in 1925.  The Bell and Colburn families had a duck hunting cabin on the W side of Hawksnest (off Nathan Walker Rd).  There was another small cabin on the isthmus between Hawksnest and Black ponds (ruined before 1950).   During this time, Elmer Crowell of Eash Harwich developed decoy carving into a fine art--he remains the most famous bird carver, with several of his carvings selling at auctions for over a million dollars.

Gathering the lands for a park

In the 1950s, the Thompson family had a cottage on John Joseph's Pond.  That pond had seven cabins.  But like Daniel Boone--who said it was time to move on when you could see the smoke from your neighbor's chimney--they were looking for more solitude.

On a long walk up Queen Anne Rd, then a dirt track with only one house for miles, they found Seth Whitfield Rd, mostly overgrown.  With further ramblings, they found Hawksnest and fell in love with the pond.  At that time, it had three cabins--Hawksnest Camp, the Bell-Colburn cabin, and a one-room cabin with a brick fireplace at the end of Round Cove Rd.  The latter was owned by the Boy Scouts--and they sold to the Thompsons.

While Helen Thompson and the two children stayed all summer at the cabin, Kenneth Thompson came up by train from New Jersey on the weekends.  An energetic man always looking for a project, he spent many of these weekends at the Barnstable County courthouse, looking up old deeds, trying to find out who owned adjacent parcels of land.

The goal was to protect the solitude of the pond.  He'd track down descendants of the owners, and they'd be surprised to discover they had inherited a bit of "worthless" land on the Cape.  It didn't take much money to assemble 120 acres--over a third of the lake front--but the hard part was the research, and finding the faint traces of old markers in the woods.

In fact, the land was pretty much "worthless" until the Cape began to grow in the 1970s.  The Thompsons were unable to rent the cabin when they weren't there.  People didn't want to rent a place without electricity.  The dirt road was over a mile long.  People would say, "What if I have a heart attack?!"

After the kids grew up and the elder Thompsons moved to Wisconsin, the cabin on Hawksnest became a liability.  Taxes were steadily increasing, and the cabin was vandalized.  The Thompson's needed to sell.  Ken Thompson was approached by people hoping to develop a golf course.

But all the Thompsons were certain they didn't want the trees cut down, and visitors restricted to "members only."  They loved the place--hoping it could be preserved for all to enjoy, for all time.
So they approached the State, and persuaded officials to purchase it for a State Park.  The Bells also wanted to preserve the solitude for future generations, so they joined the Thompsons in selling to the State.  Some additional parcels were added in later years, especially land on Oliver Pond.

By accepting the land into a State Park, the State assumed responsibility to protect the resource.  At first, the State built at gate a the corner of Seth Whitfield and Round Cove roads.  But soon vandals destroyed the gate, and the State lost control of what had been a private road.  Complete neglect of the park followed.  The roads deteriorated, the two cabins rotted and fell down, and erosion began to eat into the roads and shoreline.  Hawksnest became party zone, its dubious fame spreading as far as Boston.

It would be wonderful to know more about the history of Hawksnest.  Who were the settlers who left their mark upon this land?  What were their lives like?

We're looking for volunteers to mark locations, and research past residents.   Help shine a light on the rich past of this beautiful area!

Imagine taking a walk into the woods, sitting down around a depression, and hearing about the lives of the people who once lived on that very spot.  Their names and ages, their lives--perhaps even reading from letters they may have written.

The Future of Hawksnest

With the water quality of most of the Cape's ponds seriously degraded, the question is--can we save Hawksnest Pond? This summer, we're going to feature a series of articles about that question.
Hawksnest has the best water quality of any pond in Harwich. Can we keep it that way? And what will it take?
The East Harwich Village Center plan

Friends of Hawksnest State Park (FOH) is a volunteer group organized to conserve the natural and historic resources of the park. We value and work to sustain the exceptional water quality of Hawksnest Pond. We are dedicated to keeping the park undeveloped, and to restoring and maintaining the ponds, forest and trails for sustainable recreation. We are committed to educating ourselves and others about the forest, and to promoting a healthy habitat for native plants and wildlife. We encourage every citizen to enjoy the park in a way consistent with protecting and preserving this rare and endangered ecosystem.

Please join and help the park we all love. At present, there's no formal membership. Just send us your name and e-mail address, so we can notify you of issues and events.

Other sites you may want to visit